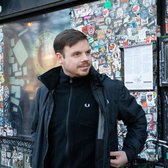 FC St. Pauli are a German football team that is strongly associated with being socially progressive, community-focused and one where fans are very involved in what the club does. We recently discussed FC St. Pauli and fan power in German football with Fabian Fritz, who is both a fan and someone who is carrying out research on community owned football clubs.

You are closely involved with FC St. Pauli, both as a fan and with the FC St. Pauli Museum. St. Pauli is an iconic club that many people associate with fan power and progressive politics. What does it represent to you?

I run the FC St. Pauli museum's educational work and the Study Support Centre. But I am also a researcher at the University of Hamburg. There, I work on democracy education for young people. I’m particularly interested in sports clubs.

If I had to use three words to sum up FC St. Pauli, they would be: progress, solidarity and democracy. Progress because of the history of the club. If you look at the time of Third Reich in Germany our club went along with the regime and got advantages from the system. The Jewish players disappeared without anyone mentioning it. Today, things are very different. The club is a symbol of anti-fascism in football. However, the result has come from a continuous development. First, the squatters of Hafenstraße brought politics into the stadium and today it is still lived and improved by the fan base, and especially the Ultras of St. Pauli and other active fan groups.

Solidarity is important because the club and its fans deeply care about their district and its people. There are numerous offers and you don't just try to take money out of people's pockets. There is the “Fanladen” as a social meeting place, there is street football for kids and there is a self-help group for fans with depression, and much more. At the same time our club showed solidarity with other clubs and initiatives. For example, it supported SV Babelsberg 03, with which we are connected by a fan friendship. The club also runs a foundation that supports many social projects.

Democracy is important because it's still a proper club. We are not a public limited company and you can still become a real member. With it, one can vote on the AGMs and actively participate in the association. This is not the case with every professional club in Germany. But beyond that, the whole St. Pauli network consists of many small clubs. This starts with the supporters' association for the museum and ends with the various fan clubs.

Fans in Europe envy us our 50+1 rule, but investors want to overturn this rule. The rule states that a club must hold a majority of its own voting rights. Among other things, this form of co-determination protects against the possibility that, as happens in other countries, an investor buys a club and has total control over it. So this rule is a great thing.

I see a need for German football to catch up with some other things; for example, in involving fans in ethical and social issues. A good example is the current Coronavirus situation. The 2019/2020 Bundesliga season is set to re-start in May 2020 with games in empty stadiums despite the ongoing Coronavirus pandemic. Through the nationwide umbrella organisation of fans, numerous fan and ultra groups spoke out against a resumption of football in the current situation. In this way, the fans are showing more responsibility than the football association.

What do you feel is the impact that fan ownership has on football?

I believe fan or community owned clubs are the past and future of football. But they exist not only because of football in the first place, but also because of society. Community owned clubs fulfil a social function. Today, there are almost 50 such football clubs in Britain. The best thing is that majority democracy is anchored in their rules. In practice, there are more general meetings and therefore there is more democracy and more co-determination. In these clubs, fans decide, for example, about the design of the new jersey or how different areas of the stadium are designed. For the members of these clubs, the community comes first. Many of the members are volunteers, not only in the club, but also in society. It is proven that people learn democratic processes by being part of such a club. More often than other citizens, they apply these processes to the rest of society. A strong club system therefore strengthens the democratic society. I would like to quote my professor from the University of Hamburg, Helmut Richter: "The future of democratic societies depends on the democratic future of clubs - and these clubs depend on the pedagogically guided democratic integration of young people". This is exactly where I see the importance of these clubs. But for this to work, the clubs must offer a structure for their young members.

As well as being passionate about football as a fan, you have also conducted research on topics such as the policing of football and community projects run by football clubs. Could you tell us a bit more about this research please.

I just touched on it. The title of my PhD is: "The grassroots movement of community owned football clubs - A driving force for democratic citizenship education?”

The current situation supports the view of a divide in society. Democracy is under threat and this raises the perennial question of where and how democratic citizenship education can succeed. The preliminary assumption in the question posed is that democracy must be actively learned by doing. This can and should be achieved by means of implementation of fundamental democratic practices – that is essentially the right to co-decide - in clubs and communities. As some studies have shown, club members are able to make better political decisions which can be developed and practised within the scope of membership of the clubs. In response to the divide in society, associative practices become more important and children and young people should be specially targeted. If the role of clubs in the democratic society is taken seriously, it should be asked how community owned football clubs determine and facilitate the future democratic discourse within this field of democratic clubs. Situated in the field of Social Pedagogy, my PhD project continues to follow the tradition of the theoretical concepts of community education (Kommunalpädagogik). So far, I am doing research with the FA, the FSA and eight Community Owned Football Clubs in England. With my findings I want to say more about democratic citizenship education in the football sector under the influence of commercialisation.

If you could change one thing about football, what would it be and why?

I hate away games on Monday or Friday, especially if you have to take a day off for them. I would change that in Germany. In the UK I would be happy if there were more standing room and if I could drink a beer or two in the stands. And of course it would be great if all clubs worldwide were democratic member organisations.

Thanks for the opportunity to do this interview. I wish your club all the best and I am happy that you have built up such a great project. I would be very happy to see you playing live soon.