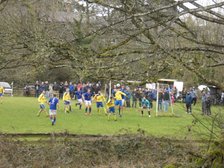 A Good Day in Llanystumdwy

Bangor 1876 began the new month with a return to league action and a trip to the charming western edge of Eifionydd. The entertaining match was played around the corner from David Lloyd George’s childhood home and the 1876 fans were treated to a liberal sprinkling of goals.

The first half had an even feel until a fourth minute goalmouth melee was ended by Les Davies’ decisive goalward touch. A thrust and parry pattern developed as the yellow-shirted hosts attempted to equalise. The pattern continued even after debutant Lee McNulty scored with a powerful header in the fifteenth minute.

The second goal thrilled Bangorian hearts and further thrills came from the well worked attacks that created more chances and a disallowed goal. 1876 scored a legitimate third goal when Jamie Petrie struck a low shot from outside the area in the twenty-ninth minute. A fourth goal was added by Sion Parry from close range in the thirty-second minute.

Bangor 1876 led by four goals to nil at half time but the fact that their team continued to attack even after conceding a fourth goal may have slightly appeased the Llan faithful.

The second half of the match featured the proverbial flurry of goals. Dylan Summer-Jones scored a hattrick within twenty minutes of the second half’s start. The first two goals were close range headers in the fifty-second minute and fifty-sixth minutes respectively and the trio was completed in the sixty-fourth minute when Summers-Jones latched on to a long pass and shepherded the ball past Coats.

In the following ten minutes another two goals were added. Leon Owens scored from close range in the sixty-eighth minute. Summers – Jones added his fourth goal of the match in the seventy-fifth minute with a tidy close range finish.

The last ten minutes of the match saw a further two goals when Jamie Petrie scored his second goal with a trademarked precise finish. Harry Jones completed the scoring in the eighty-eighth minute with a close range header.

Bangorians had only been entertained by their free-scoring team the hospitality shown by the hosts meant they enjoyed a fantastic day. Therefore we’d like to finish this report by offering our thanks and appreciation to both CPD Llanystumdwy and Menter y Plu, the community-owned pub, for their warm welcome and hospitality. Diolch! Thank You!

The next match for Bangor 1876 is Gwynedd Cup tie against Ogwen Tigers in Treborth on Saturday 8th February (1.30pm Kick Off).