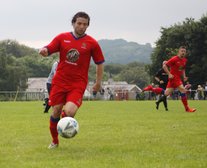 Management duo Mel Jones and Dylan Williams made three changes from last Saturday's starting line-up with Louis McFarlane making his club debut at right back, with midfielder Luke Steele and forward Benn Lundstram also drafted into the side.

Les Davies and Jamie Petrie combined to produce the first attacking threat of the match, before both sides settled into a tactical game of cat and mouse. Cameron Barry fired just wide for Bangor on 19 minutes before Llangoed responded with a series of corner kicks.

Shortly after the half-hour mark Les Davies set up an exchange of passes which saw Benn Lundstram shoot narrowly wide of the target. Llangoed responded with the home side's Llion Roberts also off target just a few minutes later.

Bangor upped the pressure as the opening period drew to a close. Les Davies saw his shot deflected behind for a corner kick on 42 minutes, and from the subsequent flag kick delivery the home side were lucky to escape as Cian Williams poked wide of the upright from the aftermath.

On the stroke of half time, the goal finally arrived with Les Davies making sure this time with an emphatic finish from 6-yards range for the all-important lead.

Bangor 1876 maintained the pressure on the home side straight from the restart. A scrambled clearance by the Llangoed defence fell to midfielder Dylan Williams on the edge of the penalty area and as Williams advanced forward he was brought down to give the Match Official no other option but to point to the spot.

With five goals from three League starts so far, Petrie made no mistake as he rifled his spot kick into the bottom left hand corner despite the best efforts of home 'keeper Rhys Owen.

A flurry of attacking activity by both sides followed before Llangoed's Jamie Roberts was yellow carded for a late challenge on the lively Petrie on 55 minutes. Just before the hour, Dylan Williams was replaced by Dylan Summers-Jones as the visitors opted for increased attacking numbers.

A minute later and Petrie saw an effort from the right hand edge of the area sail over the Llangoed crossbar before home 'keeper Owen tipped over an in-swinging Cameron Barry corner kick on 63 minutes.

As the match moved into the closing quarter of an hour, the home side were stung by a quick fire double as Jamie Petrie completed his hat-trick within the space of three minutes. Petrie's second of the afternoon arrived courtesy of a well-struck shot squeezed between the defender's legs from a narrow angle on the right flank to beat Owen in the Llangoed goal.

Petrie claimed his third with another instinctive finish in the 77th minute as Bangor edged further ahead. Dylan Summers-Jones then spurned a chance to get his name on the score sheet when he chipped his 79th minute penalty award onto the Llangoed crossbar as the score remained at 4-0 to the visitors.

With 83 minutes played, the evergreen Petrie made way for the introduction of Leon Owens, the youngest member of the Bangor 1876 squad. The sixteen-year old didn't have to wait long to make his mark as just three minutes later a quick throw in by substitute Steffan Taylor found Owens who outpaced the home defence before finding the net beyond Owen and the 'keeper's near post.