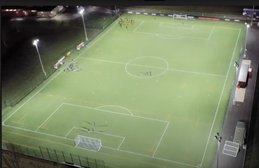 On Wednesday, 11 May, the Club received the good news that its application for Treborth to be used as a ground to stage Tier 3 matches during the 2022-3 season had been approved by the FAW as satisfying its ground criteria.

This is the third season in succession for Treborth to be so designated though it was not a foregone conclusion on this occasion as there were a number of new criteria to be satisfied. The Club wishes to place on record how grateful it is to Bangor University for the use of its facilities, and all its support, since the club was inaugurated in 2019. The partnership which we have forged has realised a number of mutual benefits and we hope that this endures for the forseable future.

We were glad that the University was successful with a recent grant application to re-model the dressing rooms in the Pavilion. This work is currently underway and will provide re-modelled accommodation for both home and away teams, and for the match officials, each having a separate access to the playing area. Other improvements will facilitate the development of a medical room and the opportunity is being taken to provide new floors for some of the public areas.

The FAW supported the proposal, financed under an UK Government grant scheme and by a contribution from the University, particularly as it improved facilties for women’s teams using Treborth. The Association has recently launched “PAWB”, its new vision and strategic plan for equality, diversity and inclusion and has already been hard at work to provide a safe and enjoyable football experience by widening access, reducing inequality and encouraging more females to participate.

Although it is disappointing that we didn’t end the season as champions, and therefore secure automatic promotion, all is not lost even though the runners-up in our league don’t get promoted automatically. There is a provision in the FAW’s Pyramid Regulations which caters for clubs with suitable grounds wishing to move up a tier and can show that they are capable of playing at that level and are financially stable, together with geographical reasons. The final decision obviously rests with the FAW.

In all other circumstances, with a playing record better than the champions of each of the other Tier 4 leagues in the north, we would be looking forward to new opportunities and challenges next season. Having said this, because of outstanding games, and the failure of certain clubs to satisfy the ground criteria, as well as other reasons, there may be a vacancy, or vacancies, to fill and you can be assured that the Board is pursuing all eventualities.

Whatever level we play at, the Club is always looking for volunteers to fill important positions in the Club’s administration and also in developing, and coaching, the junior section. We will be returning to this matter in the next few weeks. If you can help, please get in touch with the Club Secretary or any Board member.