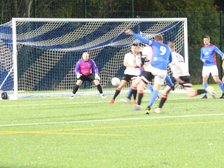 Second half goals down Glantraeth

Win under the lights at Treborth

Two goals after the break made the difference and clinched another three points in a Friday night league fixture at home to Glantraeth.

Initially it looked like Bangor 1876 had taken an early lead when Jamie Petrie glanced in a cross from Shaun Lock but the goal was disallowed due to offside.

Although 1876 had most of the possession and the chances in the opening period, the visitors managed to create some chances of their own. Shortly after the quarter hour mark, Glantraeth’s Harrison Wright cut into the right hand side of the penalty area but his left-footed shot failed to trouble Ben Heald.

Around the midway point of the opening period, Jamie Petrie had another opportunity but his header from an Aaron Heald cross went over the bar.

1876 made a determined start to the second half and came close to scoring within minutes of the re-start. Joe Culshaw fired in a volley from 20 yards out but visiting goalkeeper Connor Hughes pulled off an excellent save to push the ball wide.

Culshaw was again involved as the opening goal arrived in the 56th minute. His corner kick from the left was met at the back post by Tom Clarke, who scored with a downward header. Within a minute of the goal, 1876 came close to doubling their advantage but Culshaw’s cross from the right just eluded the onrushing Chris Jones. Shortly afterwards Harry Galeotti shot narrowly over from the right side of the penalty area.

MIdway through the second half a quick attack resulted in Les Davies crossing from the left, but Jamie Petrie’s effort drifted narrowly wide of the far post. However, it wasn’t long before Les Davies was involved in the action again. Following a corner on the right in the 70th minute, the ball broke to Les Davies on the left of the penalty area and he fired in a powerful shot from the edge of the box that found the net.

Inside the final ten minutes, it looked like 1876 had added a third goal when Chris Jones headed in a cross from Dylan Williams but for the second time of the evening an offside flag resulted in a goal being disallowed.

With just over five minutes left, Jamie Petrie beat several players and cut into the left side of the penalty area but his shot was blocked and went out for a corner. No further goals arrived in the closing minutes as Bangor 1876 secured a 2-0 victory ahead of next weekend’s match at home Nefyn (Saturday 30 October, 2.30pm).

Many thanks to everyone who turned out to show their support at this floodlit Friday night match. Best wishes to Glantraeth for the remainder of the season.