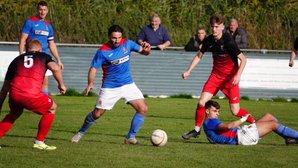 League away trip next up

After playing in two different cup competitions over the last two weekends, we return to league action this Saturday (12 November). We will make our first ever away trip to face Nantlle Vale in a game that kicks off at 2pm.

Our hosts on Saturday have been in excellent form and indeed topped the table for several weeks. They are currently in fourth position having won six and lost three of their league matches so far.

Nantlle Vale began last month with a 4-1 win away to Caergybi in the FAW Trophy that they followed up with home wins in the league against Brickfield and Llangefni. In their third home league fixture of the month they lost at home to Saltney Town. However, they returned to winning ways in the FAW Trophy on 29 October when they beat Llandudno Albion 5-3. Last weekend, Nantlle Vale lost 2-1 away to Llangefni in the League Cup.

There will be several familiar faces for 1876 fans in the Nantlle Vale side. Our former defender Jamie Thomas now turns out for Vale, as do attackers Sion Parry and Alwyn Roberts. Nantlle Vale play at Maes Dulyn in Penygroes and the postcode for their ground is LL54 6RW. Please make the trip to cheer on our team if you can.

Following Saturday’s match, our next encounter will be at home to Llay Welfare in the FAW Amateur trophy at 2pm on Saturday 19 November. The league game we were due to play at home to Saltney Town on Saturday 26 November has now been postponed but we will begin December with a league cup tie away to Denbigh Town at 7.30pm on Friday 2 December.