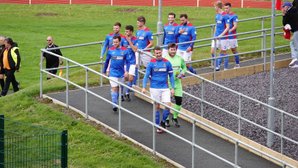 This Saturday we are back in action as we welcome Hawarden Rangers to Treborth for a match in the Ardal North League Cup. Please note that the match will kick off at the earlier than usual time of 2pm.

The game will be our first ever match in the Ardal North League Cup and also our first ever encounter with Hawarden. Our visitors are currently in twelfth position in the Ardal North West League. Hawarden began last month with a league win at home to Bodedern before being knocked out of the Welsh Cup the following weekend by top tier side Bala Town. They then had narrow league defeats against Flint Mountain, Brickfield Rangers, and Denbigh Town.

Hawarden Rangers were founded in 1974 and several highly illustrious players have turned out for the team’s youth sides before joining major professional teams. They include Barry Horne, Ian Rush, and Michael Owen.

We have managed to secure a TEN licence for this Saturday’s game, which means that a range of beers will be on sale at our clubhouse as well as teas, coffees, soft drinks, and light snacks.

Following this Saturday’s game at home to Hawarden, our next match will be away to Nantlle Vale in the league on Saturday 12 November at 2pm. We had also been due to host Hawarden in a league match on 19 November, but that match will be re-scheduled as our progress in the FAW Trophy means that we will now play at home to Llay Welfare in that tournament on the weekend of 18-19 November.

Please come on down to Treborth if you can this weekend as we look forward to another cup tie.