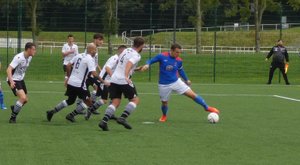 By Jonathan Ervine
5 days ago
Share via
FacebookTwitter
https://www.bangor1876.com/new

Return to league action at Treborth

This Saturday (24 September), we take on Flint Mountain in a league match at Treborth that will kick off at 2.30pm.

Flint Mountain have played three games so far this month, and they have produced a total of 22 goals. They began the month with a 7-1 win at home to St. Asaph City in the FAW Trophy before listing 4-1 at home to Ruthin Town in the NEWFA Senior Challenge Cup. Last weekend, they won 6-3 away to Llay Welfare in a game in which Corey Smart scored a hat-trick,

After three games in three different cup competitions, Saturday’s match will be our visitors’ first league match since 27 August. On that occasion, they won 2-0 away to Nantlle Vale. Flint Mountain are currently eighth in the league having won two and lost two of their four games in the Ardal North West.

Flint Mountain are a team that we have faced at Treborth before, although they were still known as Halkyn and Flint Mountain when we encountered them in the third round of the FAW Trophy in August of last year. We took the lead twice in the first half through goals from Harry Galeotti but were twice pegged back by the visitors through Louis Davies and Phil Lloyd. After the break, Les Davies scored twice before Harry Galeotti netted his second late on to clinch a 5-2 win.

We have secured a TEN licence for Saturday’s game, so it will be possible to purchase a range of beers from the clubhouse as well as soft drinks and other light refreshments. Once again, we will be selling club merchandise including the new home and away kits. Please come along to cheer on our team on their return to league action.