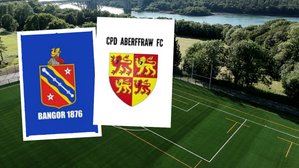 Anglesey side next visitors to Treborth

After recent matches in two different cup competitions, this Wednesday (21 July) sees the return of league action as we welcome Aberffraw to Treborth for a game that kicks off at 7.30pm.

This will be the first home game at Treborth since the FAW's announcement of the easing of Covid-19 matchday restrictions. This means that we will no longer have to reduce the capacity of our home venue due to Covid-19 as social distancing is no longer required at outdoor events. We are delighted that we will be consequently be able to welcome a greater number of fans, and look forward to what we hope will be a good turnout.

Wednesday's match will take place on the grass football pitch at Treborth which is next to our normal 3G pitch. This decision has been taken in order to protect the players from the effects of latent heat which could have been released by the 3G pitch after several days of extremely hot weather.

Although many Covid-19 restrictions have been eased recently, we have been advised by the FAW within the last few days that it is important that spectators continue to follow procedures aimed at ensuring that they are as safe as is reasonably possible. In particular, we have been advised that it is still good practice to request that spectators maintain 2 metres social distancing between each other and remain at least 2 metres from the field of play.

Wednesday evening's opponents Aberffraw have so far this season played three matches in three different competitions, all of which have involved them facing fellow Anglesey outfits. Aberffraw began this season with a match away to Llanerchymedd in the Welsh Cup which they lost on penalties after a 2-2 draw. They have since won 3-1 at home to Amlwch in the league and 5-1 away to Caergybi in the FAW Trophy.

Aberffraw's ten goals in their opening three games have been shared out among seven players, with Matt Reynolds, Rcihard Roberts, and Tomos Hughes top scorers with two goals each.

Before the match on Wednesday evening, there will be a minute's applause to celebrate the life of 1876 fan Daniel Shooman who sadly passed away last week. Our thoughts are with Dan's friends and family at this sad time.