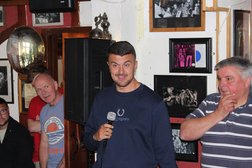 Players and fans celebrate the season

Last weekend players, fans, coaches and club officials gathered at Y Glôb in Upper Bangor to celebrate the end of the season and the news that we will be playing in Tier 3 next season. It was also an occasion to recognise some significant achievements.

The Fans’ Player of the Year was presented to Tom Clarke. The central defender certainly made his mark at both ends of the pitch this season, helping to keep things tight at the back and scoring several important and impressive goals.

Players’ Player of the Year was Joe Culshaw, who showed an impressive level of consistency throughout the season as he played every single minute of our competitive fixtures. Indeed, he featured in quite a few different positions and indeed played in more than one different position during several games this season.

The trophy for top goalscorer was presented to Corrig McGonigle whose achievement is all the more remarkable given that he played his first game for 1876 on 25 February. In eleven league games, he managed to score 27 goals. He also added a further seven goals in four League Cup matches, including our final goal of the season in our 3-0 League Cup win against Bodedern.

A special achievement award was presented to goalkeeper Ben Heald, who is hanging up his gloves after a long and impressive career. He played 24 times for 1876 this season and kept ten clean sheets. During the first half of the season, he had one spell where he went 440 minutes without conceding a goal.

We would like to congratulate all our prize winners and also take this opportunity to thank all our players, coaches, sponsors, volunteers, and fans for their contribution to the 2021-22 as we look forward to life in Tier 3 in 2022-23.

Many thanks to Gerallt and staff at y Glôb for their hospitality, and to Bwyd Da for providing the catering.