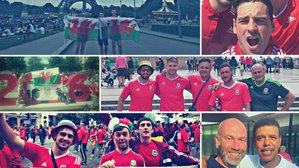 Yesterday we focused on our fans' memories of Euro 2016, and today it's our players and coaches who are looking back on a memorable summer in France...

Iwan Williams
"It was an amazing experience being in France following our country in a major tournament. We travelled the length and breadth of France in a camper van and I probably overstayed my welcome, which nearly ended up with my wife divorcing me! However, that day in Bordeaux when we beat Slovakia will live with me for the rest of my life."

Dylan Williams (assistant manager)
"I was fortunate enough to attend the Wales v England game. Although the result went against us that day, the whole atmosphere was surreal, especially seeing and hearing the red wall.During my time at the Euros I spent a few days in that company of Chris Kamara, which was a brilliant time, hearing about stories such as when he played for Welshpool with Paul Merson."

Matt Lock
"I only went down to watch the one game against Northern Ireland. Me and four others drove down to Paris like sardines in my mate's Audi A3! It felt like we were travelling for days but it was totally worth it! We eventually got there in the early hours of the morning before the game. We had a quick nap in the hotel before the big day. We met up with the lads and the rest of the Welsh army on the square, it was a hot sunny day and the beers were flowing! It probably wasn’t the best game to see as it was a stalemate up until the own goal but the atmosphere was unforgettable and the craic with the Welsh and Irish fans was brilliant! After the game the party spilt out into all the bars until the early hours, before heading home the next day back squished in the car with bad heads. But I’d do all over again."

Harry Jones
"Belgium vs Wales was by far the best footballing day of my life from start to finish, the togetherness of the Wales fans in Lille was unbelievable. I would do anything to relive the moment Sam Vokes put us 3-1 up, the fans and myself included didn’t know whether to laugh or cry! It was an unreal night."

Ben Owen
"What a summer! Due to having other things booked and planned, I didn’t think I could go. I’d been saving up to go to Thailand for a month, I had all my savings ready. Instead, I made the better decision and blew it all on seven nights in France. The Northern Ireland game was absolutely fantastic, bumping into so many familiar faces in Paris was surreal! The atmosphere on match day was something else! We got back to Wales in time to watch the Belgium game, only then to go and book a one way flight back to France for the semi final. Unfortunately we didn’t make the final but I don’t think anyone could complain. Both trips have definitely left memories that will last a life time."