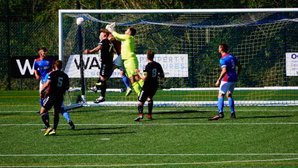 In our latest player interview, goalkeeper Huw Shaw talks about goalkeeping, his football heroes, and the World Cup...

How would you describe your first few months at 1876?
I've really enjoyed myself so far, the lads have been great, I've played with a few of them before coming to 1876 so I sort of knew that I was coming to play with some top quality players.

What have been your favourite games so far?
I think I'd have to say the Felinheli game as it was my home debut and to keep a clean sheet made it 10 times better.

If you didn't play in goal, what position would you like to play and why?
I only really started playing in goal at the age of 17 and before that I used to play as a centre half but unfortunately I hurt my knee and thought it was a perfect opportunity to try something different. I sort of fell in love with the position from there really, so if I was going to choose anywhere I'd probably say back to being a centre half.

Who were your footballing heroes when you were younger?
I used to love watching the likes of Ryan Giggs, Paul Scholes growing up so I'd have to choose either one of them.

Who do you think is going to win the World Cup this year?
I'd absolutely love it to be Wales but unfortunately I can't see that happening as much as I'd love it to happen! I'd probably have to say either Argentina or surprisingly Denmark!