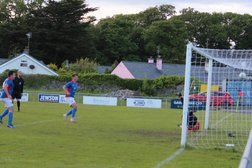 Bodedern withdraw from match on 28 May

Following Tuesday night's dramatic 6-4 win away to Pwllheli in the NWCFA Intermediate Cup, we had been expecting to play at home to Bodedern in the semi-final of the tournament this Saturday (28 May).

However, we learned this morning that Bodedern have withdrawn from this fixture and forfeited the tie. This means that we will now play against fellow fan-owned team 1879 Rhyl in the final of the NWCFA Intermediate Cup. The game is due to take place in July, just before the start of the new season. North Wales football expert Dave Jones has provided some background to the postponement of this Saturday's match in article on his website Grassroots North Wales (see: https://nwsport.co.uk/2022/05/27/bodedern-withdraw-from-tomorrows-nwcfa-intermediate-cup-semi-final-at-bangor-1876/)

The fact that our scheduled NWCFA Intermediate Cup semi-final will not now take place due to Bodedern's withdrawal means that we have now played the last match of our season following our NWCFA Premier League Cup win against Bodedern in Cemaes last night (read match report here: https://www.bangor1876.com/news/league-cup-triumph-for-bangor-1876-2705195.html)

Whilst our season has now ended sooner than we expected, we are delighted to have concluded it it with a cup final victory in a match that was greatly enjoyed by our fans. It was fantastic to see players and fans coming together to celebrate the win. Since the game, many players have expressed their gratitude to our fans who turned out last night and have supported us this season. We are particularly grateful that so many of your have turned out this week to attend several matches which have been arranged at short notice and in quick succession.

We would like to take this opportunity to again thank all our fans for their support at home and away this season, and helping to create such as special atmosphere around our club as we develop. Many thanks to everyone who has helped behind the scenes, volunteered, and of course to all our playing and coaching staff. Many thanks also to everyone who is involved with our youth set-up and our sister team CPD Merched Bangor 1876 Women.

In addition, we would like to say a massive thank you to our sponsors for their fantastic support as well which has been instrumental in helping us develop as a club. We are tremendously appreciative of your generosity.

We hope to soon be able to announce some pre-season friendlies as we gear up for the new season. Many thanks again to everyone who has put in hard work on and off the pitch this season, and supported us in what we have done. Diolch i bawb! / Thank you everyone!