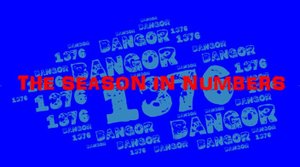 NOT JUST FOR ANORAKS - OUR RECORD SEASON IN FIGURES

From new boys to record breakers

The 2021-22 season was one to remember for a number of reasons even though we didn’t win the League championship. As hard as it is to imagine, we have just completed our first full season, having won the Gwynedd League title in our first season of existence. We were runners-up in the League, and whilst one pays tribute to the achievement of the team which finished first, Bodedern, we took great pleasure in being the only team to beat them in the League, beat them in the League Cup final, and gained a walk-over victory into the Intermediate Cup Final when they conceded the semi final match to us. In the three games played against them we scored an aggreegate of eight goals to their four.

Goal scoring was not a problem, even though the standard of teams was supposed to be better in Tier 4. Statistics provided by the excellent Cymru Football app show that we scored 139 goals in 28 League games, averaging almost 5 in every game. Indeed, there were two games in which we reached double figures, and seven in which we scored eight or more goals. In addition to being the League top scorers, we also conceded fewer than anyone else, 19, to post an amazing goal difference of 120. These statistics are the best in relation to any team playing in the fourth tier of the Welsh Pyramid.

The story continued in the cups. In becoming League Cup champions, we scored 21 goals in four games (including the Final) with only 2 conceded. In the yet to be concluded Coast Intermediate Cup, in which we meet CPD Rhyl 1879 in the Final, which is likely to be a curtain raiser for next season, we scored 16 goals, but with 5 against, four of which came in the never to be forgotten game at Pwllheli in the quarter final, which we won 6-4 after extra time.

In terms of appearances, Joe Culshaw played most League games (28), followed by Tom Clarke (26) and a trio of players on 25 each, namely Cameron Barry, Les Davies, and Corey Jones. Joe also played 12 games in various cup competitions though we obviously faced problems with the Covid virus which meant that we couldn’t fulfill a fixture in the Welsh Cup and had to concede the tie.

Having scored two goals in his debut for us on 25 February, Corrig McGonigle played a further ten matches, scoring a total of 27 League goals, an average of almost three a game. His biggest haul was an amazing eight goals in the 15-1 beating of Gaerwen at home on 25 March. Not only was this a record win, but Corrig’s individual perfomance set a high bar. During April/early May, he managed four successive matches when he scored three or more, with five away against one of his former clubs, Pentraeth, and four at home to Nefyn United. He scored a further six goals in Cup matches.

Not to be outdone, Les Davies also scored 27 League goals and a further nine Cup goals, playing 37 matches in total, starting with the season’s opener against Pentraeth in Treborth, back in July 2021, when he scored a hat-trick. Les captained the side on a number of occasions, including the season finale – the League Cup final at Cemaes. He achieved all this in addition to getting married, and came back a new man from his honeymoon!

Nineteen players shared our League goals druing the season, Gethin Thomas (12) and Chris Jones (10) reaching double figures. Jamie Petrie scored eight goals in the cups, and a similar number in the League. Gethin added a further 3 to his total in the League Cup. Just outside the double figures of League goals were Cameron Barry, and Tom Clarke, with nine goals each. Tom reached his double figures in all matches in that memorable League Cup final when he opened the scoring.

The statistics for the attack are easy to obtain, and whilst some members of the defence made forays into the opposition half to score, their greatest achievement was to keep down the number of goals against. Credit to all our defenders (no names mentioned, they were all heroes!) I hope that we will be excused for naming one of our three goalkeepers who appeared during the season. Cian Venmore Thomas, who made his debut, away versus Aberffraw in early February, as a sixteen year old. Cian kept a clean sheet that day and was named in eleven matchday squads in subsequent matches.

None of this would have been achieved without the support and guidance of our first team management team during the season, Mel Jones, Dylan Williams, and Michael Johnston. Johno moved seamlessly into the team manager’s hot seat and has proved to be a dedicated and inspirational leader. We thank them all, together with the other coaches, Aled Hughes, Chris Jones, Gareth Williams, and Mervyn Williams, who have put in many miles in supporting and sustaining the team. Trudy Owen has been a familiar figure from the beginning, attending to knocks and ailments and, during the season, we were glad to augment the off-field welfare team with Rhys Last, a chartered physiotherapist, and Simon Leeson, our doctor turned club first aider (You’re not allowed to have a Club Doctor in Tier 4!).

Finally, thanks to you, the supporters, who have turned up in your hundreds. in various corners of Gwynedd and Anglesey, to support the team. We also thank our sponsors who have increased in number, but we can always do with more! Likewise the matchday volunteers who helped throughout the season including the challenging pandemic period. We can do with more of you, particularly those willing to help with our junior teams, and we thank those who have given their time to assist with looking after the juniors.

We have been fortunate to have at our disposal a ground which has gained a Tier 3 licence for three seasons running and is constantly being improved. Our thanks go to Bangor University and its sports staff who have been so supportive and accommodating in facilitating our progress.