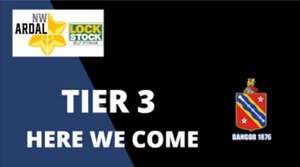 MORE HISTORY IS MADE AS WE REACH TIER 3

We represent Bangor in the National Leagues

In a historic week for Welsh football, Bangor 1876 added to the narrative by reaching the third tier of the Welsh Football Pyramid, just three years after the club was set up, and will now enter a National League for the first time.
When it appeared to the Club that it might miss automatic promotion from Tier 4, despite the manner in which the team was performing, it took advantage of provisions in the FAW’s Pyramid Regulations which allowed clubs with grounds which had satisfied the Tier 3 criteria, to apply to fill any vacancies in the four tier 3 leagues. With the finalisation of league positions and the resolution of promotion and relegation issues, 60 of the 64 places in those leagues had been filled. Today, the National League Board of the FAW unanimously agreed to fill all four vacant places by considering vacancy applications.
In its letter conveying the Board’s decision to the Club, the FAW commented “..The Board had to make a difficult decision, using their absolute discretion, but I am pleased to confirm that your application to fill a vacancy in the Ardal Leagues has been successful and the Club has been placed in the Ardal North West League (Tier 3) for the 2022/23 season…”
As followers of football in the region will know, the geographic extent of the Ardal North West area is vast, stretching from Saltney Town, on the English border, to Bodedern. With the transfer of Llanuwchllyn from North West to North East, we will not venture too much further south of the A55 corridor than Penygroes, to play Nantlle Vale, and Llanrwst. The traditional rivalry with Rhyl will be re-kindled. but there will also some new grounds in the Wrexham and Flintshire area to be visited, including a return to Brickfield for Johno. There’s also a new local derby to be contested, versus CPD Y Felinheli.
There are some very competitive games ahead and, as we step up, there are additional demands upon the Club in terms of resources. We hope that our fantastic band of supporters will be excited at the prospect of closely-contested matches and continue to attend home games and travel in numbers (a little further!) to cheer on the boys. We will also be requiring more match day help, but more of that in coming weeks – let’s celebrate Wales reaching the World Cup finals and Bangor reaching the National leagues.
Before closing, a word about friendlies – we will shortly be announcing a programme which will prepare the squad for the challenges ahead. Unfortunately, because we were confident of the merits of our case to be admitted to Tier 3, we have had to be aware that we needed to avoid confirming games against teams likely to be in the same league as us. You may also be aware that the dressing rooms and floors in the public areas in Treborth are currently being upgraded, with work continuing for another month or so. Once these games have been confirmed we will publish details using our usual social media channels.
Share via
FacebookTwitter
https://www.bangor1876.com/new
Recent news