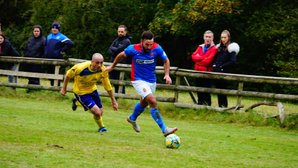 We return to action this Saturday with an away trip to face Meliden in the FAW Trophy. The game kicks off at 2pm.

We have reached this stage of the competitions after wins away to Llanystumdwy and at home to Glantraeth. Our hosts on Saturday began this month by winning at home to Bontnewydd in the FAW Trophy and saw off Talysarn Celts on penalties in the previous round of the tournament at the start of September.

Meliden play in the North Wales Coast East Football League Premier Division (Tier 4). They are currently twelfth in the sixteen-team league having won one, drawn three, and lost three of their seven games this season. In their most recent outing, they drew 3-3 at home to Bro Cernyw after scoring a last-minute equaliser.

Meliden are known as the miners and their ground is also called The Mine (postcode: LL19 8PE). Please come along to support our team if you can as we return to cup action.