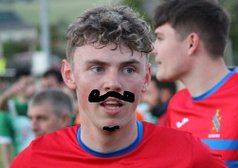 After learning that Luke Steele is again attempting to grow some facial hair to raise awareness of mental health as part of of Movember, we said to ourselves 'we moustache him a few questions about that'. Here's an interview where he discusses Movember, mental health, and moustaches.

You've done Movember a few times now. What is it that you think makes it such an important cause?
I think Movember is really important as it's one of a few charities whose main aim is to shine a light on men's health, be it mental or physical. Seeing as the statistics point out that at least one man dies every 45 because of suicide, and numbers of men dying of testicular and protate cancer are still really high, something needs to be done. The Movember charity does this.

What do you see as the role that football can play in raising awareness about mental health?
I think that football can be massive in raising awareness for mental health. It's one of the few things that tends to bring communities together on a Saturday on a fan level and also in terms of a player level. Football gives us all the opportunity to have a chat, be it on the 'slate bonc' at half-time at Treborth or in the changing rooms if you're a player. As they say, a problem shared is a problem halved, and football definitely gives us this opportunity to talk about stuff with one another.

Movember is very much associated with moustaches. Which past or present player do you think has the best moustache in football?
Probably seeing as I'm a proud welshman, I'll have to go with Ian Rush.

Of your 1876 team mates, who do you think would look the best or the worst with a moustache?
To be fair, this is my third time doing a Movember and I'm still struggling to grow whiskers let alone a 'tash'. But one thing's certain, the firemen in our team - Dylan Williams and Ben Owen - always have horrible moustaches. I'm sure their other halves will be glad to see the back end of November so they can have a shave!

Which of your 1876 team mates would you trust the least to cut your hair?
Harry Galeotti, I wouldn't trust him to remember to bring his own football boots so I'd hardly trust him with a pair of scissors!

Finally, what advice do you have for anyone who'd like to find out more about Movember or sponsor you and your 'Mo bros'?
Movember's website its self is full of information on what they do and who it benefits. It also shows all the different ways that people from all around the world are currently fundraising. That being said, me and the lads at Bangor University Football Club will be doing 2 mile runs to raise awareness of the 2 men who'll die because of suicide after 90 minutes (the same as a football match). A few of us are doing a walk from Bangor to Snowdon, which is some feat, and we'll be doing a whole host of fundraisers that will take part throughout the rest of the month! If anyone would like to sponsor me then the link to do so is: https://uk.movember.com/mospace/14626540?utm_source=qrcode&utm_medium=mo_app&utm_campaign=movember&utm_content=app_share_mospace_qr

Photo: As Luke mentioned that he was having trouble growing significant facial hair, we decided to create an image of what he would like look with a moustache. The professional design firm we contacted weren't returning our calls, so we had to resort to using Windows Paint.