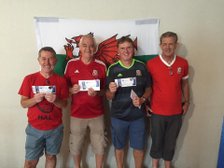 Rich, Dafydd, Ifan and myself went out as a small group of four, of which there were many hundreds of such groups. We expected to come home after the group stages, how wrong we were! We based ourselves in a chalet, in a holiday park outside Bordeaux for the group stages.

Game 1 - The first game in Bordeaux was a never to be forgotten experience, the sea of Welsh red, which developed into a waterfall coming down the steps leaving the stadium after the game, our national anthem, which left us in tears, the camaraderie with fellow Welsh fans, and Slovaks, the Charles Dickens bar the afternoon/evening before the game! The result, which was in doubt until the final whistle, the explosion of emotion afterwards!

Game 2 – Lens, we travelled by train into Paris, and then the football special, Welsh and English fans travelling together! There was tension all day, but no trouble as such. We were disappointed at the result, then had a night in Paris, before picking up Vince and back to base at Le Teich.

Game 3 – Toulouse, we could be going home depending on how results went. Train there, one night in a 4-bed one room effort, late kick off, second best rendition of the anthem, fantastic performance, capped by hearing on the radio that England had drawn, and we’d actually topped the group! After the game, bars were closing all over Toulouse at police orders, we finally managed to find one open for some happy scoops, until we all became too rowdy and the police found us at about 2.30 in the morning!

Game 4 – We said our goodbyes to Lionel and Jennifer, our hosts at Le Teich, and hit the road for Chartres/Paris our bases for the last 16 game against Northern Ireland. We had already found a home from home in Paris at Chez Papa, a bar in the Montparnasse area, the staff made us really welcome. Ifan had gone home, dropped off (quite literally) in Bordeaux airport. He rolled out of the van as it was still moving! We picked up another member of our group however in Myfs, an old friend of Rich and myself from Dolgellau, who was travelling around in his camper van, Myfanwy ( as in Myf, fan, fi – get it!). The game was disappointing, but it was the result that mattered, into the quarter finals!

We travelled into the Somme area, stayed the night in Albert, no room at any of the inns due to the centenary of the Battles of the Somme, so we slept in the two camper vans on the main square. A very pleasant evening was spent in the Three Pigeons bar, watching England v Iceland on television!

Game 5 – Dafydd returned home, and was replaced by Geraint Parry, from Llanfairpwll, another moiderer! So, onto Ypres, in Belgium, as our base for the next few days, in a fantastic AirBnB type of house, with prize winning lasagne. It was also where we found the best bar of our trip, Oude Veemarkt, with the best ever landlord. The food and bar were within 100 yards of our base! Matchday in Lille was absolutely nuts, red everywhere, the Welsh fans vastly outnumbered by the Red Devils, no trouble whatsoever, good natured banter throughout. The game itself will of course be forever etched into folklore for the comeback, and that goal! The Belgians were absolutely fantastic after the game, clapping us wherever we went.

The Semi final – all good things come to an end. Train south to Lyon, another fantastic city, not the result we wanted, 'if onlys', as in if only Aaron Ramsey and Ben Davies could have played. The long journey home followed, via Dunkirk, which seemed appropriate.

32 days away in all away from home, and some fantastic memories:

- The Welsh fans – who did themselves and their country proud, perfect ambassadors.

- The French and Belgian people – who gave us a fantastic welcome wherever we went.

- The camaraderie – between our small, ever changing group, and everyone else on the trip, from all corners of Wales and Europe.

- The cities – Bordeaux, Toulouse, Paris, Lille and Lyon – all different, all memorable.

- The experiences – Chartres and its cathedral, Cap Ferret and its oysters, the Somme – including Mametz Wood, the memorial to the Welsh, and to Hedd Wyn and so many more

- The interviews – on radio, from Radio Cymru to Radio 5 live.