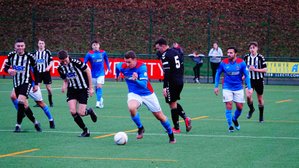 1876 through to next round of FAW Trophy

Bangor 1876 are through to the next round of the FAW Trophy following an exciting encounter with Llay Welfare.

The match got off to a lively start and 1876 came close to opening the scoring inside the first five minutes but a Les Davies ball across the face of goal narrowly eluded the onrushing Jamie Petrie. However, it wasn't long before a goal arrived. Following some pinball in the Llay penalty area after a free kick, Les Davies found the net with a powerful low shot after seven minutes.

Within three minutes, Bangor doubled their advantage. Sion Edwards played a neat pass to Liam Morris who beat the visiting goalkeeper Kyle Flower after breaking into the left side of the penalty area. With just after a quarter of an hour gone, 1876 won a penalty after Gethin Thomas was fouled. Les Davies dispatched the spot kick to score his second and Bangor's third of the afternoon.

Llay fought hard in an effort to get back into the game and came close to reducing the deficit just before the half hour mark but Michael Wright's volley from 20 yards struck the post and rebounded to safety. At the other end, 1876 came close to adding a fourth goal. Liam Morris broke into the left side of the penalty area and lobbed the ball over Flower but Llay managed to clear the danger.

Inside first half injury time, Ben Heald had to look alert to tip over a free-kick from Matthew Worrall as 1876 preserved their three goal advantage at the interval.

After the interval, Llay sought to find a way back into the game and were unlucky not to reduce the deficit when Owen Jones hit the post after breaking into the penalty area. Bangor also had changes inside the opening ten minutes of the second half, including when Jamie Petrie headed over after Corey Jones nodded the ball across goal following a corner.

Shortly after the midway point in the second period, another goal arrived as Bangor extended their advantage. Liam Morris played a corner short to Sion Edwards, who crossed the ball from the left wing. The delivery found Les Davies, who completed his hat-trick with a powerful header.

Llay continued to press and reduced the deficit inside the final quarter hour when Rhys Lloyd scored with a glancing header following a cross by Matthew Worrall from the left. Lloyd had a chance to score another moments later but Ben Heald saved well with his feet when the Llay attacker broke into the box.

As the clock ticked down, Llay created some more chances. Following a corner from Matthew Worrall, Thomas Wells was unlucky to see his header strike the top of the crossbar and rebound to safety. Bangor were also trying to further their advantage and looked to have created a great opportunity to do so when a Les Davies pass found Gethin Thomas, but Thomas was adjudged to be offside as he bore down on goal.

Inside second half injury time, Ben Heald made a good save to repel a shot by Matthew Worrall from just outside the box. In one of the final attacking moves of the match, Perry Shoemark shot from a similar distance but his effort struck the outside of the post on the way out for a goal kick. There were to be no further goals as Bangor secured their place in the draw for the next round.

We don't have a game next weekend and will return to action with a league cup match away to Denbigh Town on Friday 2 December (7.30pm).