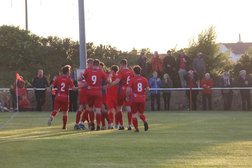 Despite having played 120 minutes away to Pwllheli in the NWCFA Intermediate Cup only 48 hours beforehand, 1876 made a lively start to the League Cup Final. With six minutes one the clock, the ball broke to Shaun Lock 22 yards out and the left back fired in a powerful low shot that Bodedern goalkeeper Jordan Taylor did well to push away for a corner.Taylor again had to be alert a few minutes later when Les Davies broke into the left side of the box and pulled off a fine save with his feet to keep the score goalless.

Shortly before the midway point in the opening period, another chance came 1876’s way following a long throw-in by Shaun Lock. The ball was flicked on by Les Davies and then Corrig McGonigle before Harry Galeotti side footed narrowly wide at the back post.

Just after the half hour mark, the opening goal arrived. After attempting another long throw-in, the ball found its way back to Shaun Lock on the left wing and provided him with the chance to cross the ball into the box. Taylor attempted to punch the ball clear before it was headed away from near the goal line by one of his defenders. Harry Galeotti headed the ball goalwards and Tom Clarke nodded the ball across the line from close range.

Within six minutes of taking the lead, 1876 doubled their advantage and again Shaun Lock played a key role. A cross into the box from the full back swung in towards the six yard area and an attempted clearance by Ryan Lees under pressure from Corrig McGonigle resulted in an own goal that made the score 2-0.

Two minutes into the second period, Bangor 1876 came close to further extending their advantage. Cameron Barry, who replaced the injured Gethin Thomas in the first half, got on the end of a cut back from Harry Galeotti but his shot was excellently saved with his feet by Taylor in the Bodedern goal.

However, there wasn’t long to wait before another goal arrived. In the 51st minute, Corrig McGonigle chased a ball through the middle and looked to have an opportunity to run through on goal. However, he took the time to steady himself before chipping the ball over Taylor from 30 yards to make the score 3-0.

Ten minutes into the second half, Bodedern recorded their first shot on target when Ryan Lees tried an effort from 25 yards but Ben Heald was equal to it and completed the save. Just before the midway point in the second period, Bodedern had a much better chance when Sam Gregson broke through the middle but he side-footed the ball wide of the post. Gregson had another opportunity with just over twenty minutes left but his stabbed shot was well saved by Ben Heald.

Inside the final quarter hour, Harry Galeotti came close to adding a fourth goal for 1876 with a side footed effort after arriving at the back post but Taylor once again made an excellent save with his feet to keep the ball out.

Bodedern had a chance of their own with two minutes left, but Casey Gregg couldn’t find the target when the ball broke to him on the right edge of the six yard box. There were no further goals as Bangor 1876 clinched their first ever triumph in a cup competition.

We would like to thank all our fans who made the trip to Cemaes Bay to provide such vocal support at our first ever cup final. We have another game against Bodedern coming up very soon as we face them at Treborth in a NWCFA Intermediate Cup semi-final this Saturday (28 May). The match will kick off at the later than usual time of 3.30pm due to a number of other events taking place at Treborth the same day, and will be played on the grass pitch. Parking will be available on the American football field between the 3G pitch and the grass pitch. Please arrive earlier if you can in order to try to help things run smoothly.