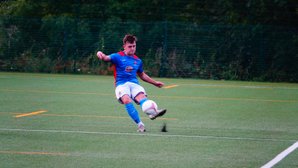 By Jonathan Ervine
3 days ago
Share via
FacebookTwitter
https://www.bangor1876.com/new

Defender on being back in Bangor and season so far

Our defender Kian Owen talks about being back in Bangor, the season so far, and the player he'd like to swap places with. Read more in our latest player interview.

What's it been like to be back playing football in Bangor again?
Playing football back at Bangor is a big thing for me because I’ve been a Bangor fan since I was a young boy and It’s always been a dream for me to play for my home club. With what’s happened to football in Bangor over the past few years, I’m happy to be back and helping the team get back to where we belong which is challenging with the big teams in the big leagues. The togetherness within the club from the players to the fans is also great

How would you say the season has been going so far?
I think we’ve had a great start to the season as we’re still unbeaten in the league and going strong in the FAW Trophy, which is a massive thing for us due to the history the city has in cup competitions and what this means to the fans.

Have there been any standout games for you?
For me, the two standout games this season have been Rhostyllen away and Llay Welfare at home where we didn’t start the games and we found ourselves 2-0 down at half time. These two games stand out because of the character and heart the boys showed as a squad in order to come back and get something out of the game.

Who would you say are the biggest characters in the squad and are there any players with odd pre-match rituals?
The squad is full of characters and I think everyone brings something, but the main jokers are Aaron Heald and Sion Edwards. Those two are always joking around in the changing room and in training, which lifts the mood on a match day and gets the boys going. I’ve only been at the club since pre-season so I’ve not picked up on any odd pre-match rituals yet.