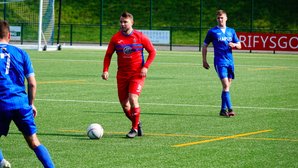 In the third and final part of our interview with player manager Michael Johnston, he talks about his highlights of last season and his attempts to make into onto the scoresheet.

What would you say were the highlights of the season?
Obviously, my first game in charge was a plus for me. Losing 1-0 then coming back to win 2-1 against a strong opposition was very special and a big part of that was the impact that Gethin Thomas and Shaun Lock had on that game.

Also, there were some big away wins. These were not necessarily just about the scoreline but great results away from home against Llanrug and Llanberis were big highlights. I think I ran half the pitch to celebrate when Jamie Petrie scored in the 1-0 win away at Llanberis.

But I think the main one has to be the cup win against Bodedern. To play 120 minutes 48 hours prior to the final then to perform the way they did was very special and made me realise what a great bunch we have within our squad. To be able to give the fans the first trophy that they have seen lifted was a memory that I will hold forever.

Finally, we can't go without asking you about your goalscoring exploits. Your only goal this season was a scuffed effort from about two yards out away to Aberffraw but we've seen you try a few shots from outside the box. Apart from in training sessions and dreams, what's the furthest out you've ever scored from?

My goal scoring days are definitely over but, apart from the 40 yarders you have witnessed yourselves, the only other one I can remember was playing in a final for my secondary school and scoring the winner from outside the box with a half volley. However, no one will believe that.

This Saturday (2 July), we begin a new season with a home friendly against Porthmadog that kicks off at 2.30pm. Please remember that you can now buy or renew your club membership and purchase a season ticket for 2022-23. We have kept prices at the same level as last season and further information is available here: https://www.bangor1876.com/news/prynwch-eich-aelodaeth-a-thocynnau-tymorbuy-your-membership-and-season-ticket-2710258.html.