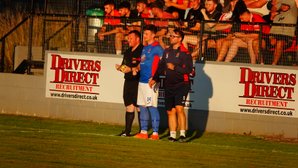 Johno on the season so far

Interview with our player manager

We recently caught up with Michael Johnston to discuss his October manager of the month award, the season so far, and moustaches that have been appearing at Treborth as we're now into Movember.

How does it feel to have been awarded the manager of the month prize for October?
Manager of the month is a nice accolade but the most important thing about last month was coming through it with a good points tally. Luckily, the lads were fantastic. Some of them played out of position, some played through injuries and others accepted my decisions to leave them out on a Saturday. The credit should go to them to be honest, they have been fantastic and have done everything we have asked for.

How do you feel the season has gone so far?
I have been reallly please with the progress we have made. We started the season well at home but unfortunately, lost some points and goals further down the line due to unforeseen circumstances but then got taste of how teams at this level will punish mistakes. It took us a while to adapt to things and we fell flat with a couple of draws against opposition who are very well established at this level. These were away at Rhostyllen, who played really well on the day and punished our mistakes, and at home agaisnt Llay, who were excellent and were two goals up in the first half. This was an eye opener for some who recognised that in order to gain the advantage at this level, you can’t switch off, you can’t just allow teams to go up in games and you can’t not make that extra yard as you will get punished. That said, we showed exceptional character and desire to claw ourselves back into these games and come away with creditable draws.

Another example of this was Bow Street away, which, was probably the craziest game of football that I’ve ever been involved in. Again, we were naive at times and created our own downfall which allowed them to punish us. This, I feel, was a turning point for us as, since then, as well as not dropping points or losing cup games, we have played eight games, scored 40 goals, conceded 7 and had 4 clean sheets. This has been the big thing over the past month or so, clean sheets win games and this is something that we are working hard on to make better. You can see there is a common goal within the team that is taking pride in clean sheets and not conceding goals. The most pleasing thing to see during this period has been seeing the lads’ confidence grow and coming together as a group showing that we all have the same goals.

Although we've got quite a few games to play before Christmas, Saturday's home match against Llay Welfare will be our last game at Treborth before the festive season. What has it been like playing there this season?
Treborth has been great this year, we have seen some big attendances too. The slate bonc has been out in force at times and long may it continue. I’m sure everyone has appreciated the performances the lads have put in this year both home and away.

As several 1876 players and fans are participating in Movember again this year, who would you say are the people you've encountered within football with the best and worst facial hair?
There have been a few. Going back a few years now, Peter Hoy was not a well groomed man and his beard used to make him look like he’d just woken up. More recently, there have been some awful attempts at a moustache. Ben Owen turned up to training last week looking like Ted Lasso, Dyl Williams is having a good go but it does not suit. However, the worst attempt at facial hair has definitely been by Joe Culshaw. I think if he stuck his head out of the window on our way to football, the fluff would come off his face.

Over the weekend, you'll be able to read an interview with another member of our first team squad who is growing a moustache for Movember.