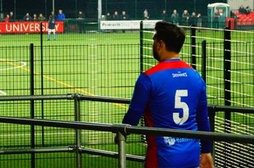 Johno: "It's great we're going up but the hard work starts now"

Read second part of interview with our player manager

Following the recent news that we will take our place in Tier 3 in the 2022-23, we recently caught up with our player manager Michael Johnson. He gave us his thoughts on the news and the season ahead. This is the second of a three part interview with our player manager as he reflects on last season and looks forward to what lies ahead.

First of all, Johno talked about reactions to the news that we have been granted Tier 3 status and stated the following:

“A lot has been said about our promotion and whether or not we should be there. I know for a fact that there were lots of other teams applying for Tier 3 status via the application process we followed. Even though we did not win the league, the hard work did not stop behind the scenes. In particular, Dafydd Hughes deserves great credit for his meticulous approach to the Tier 3 application process.”

Our player manager was also keen to point out that Tier 3 will bring new challenges and provide an opportunity to show on the pitch that our club merits its place in the higher league:.

“I am under no illusions that some people will still say we do not deserve to go up and they can say that if they want. It is up to us now to prove to people that we are worthy of that Tier 3 spot and can hold our own at a higher level. My job now is to get the players to understand the step up and how different tier 3 is going to be compared to both tier 4 and tier 5. Teams will be fitter, stronger and will have players who are established at that level or at higher levels.”

Johno also called for unity as look forward to another exciting season and made clear that preparations are already underway for what lies ahead:

“This is where I need to drum into everyone from fans to board members how important it is to stick together, and grind out results when needed and express ourselves when we can against some very good teams within our league. It's great that we're going up but the hard work starts now and we need to keep striving forward and always trying to improve. We have very ambitious players and with a couple of strong additions, I'm hoping that we can hold our own in Tier 3.”

Very soon, we will bring you a report on our recent end of season get together at the Globe where we celebrated the 2021-22 season and looked forward to life in Tier 3 next season.