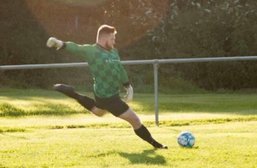 We are delighted to announce the signing of goalkeeper Huw Shaw from Conwy Borough. Huw has experience of playing in tier 2 with Conwy. The Bangor-born shot stopper also counts Llanfairpwll among his former clubs.

As well as keeping the ball out of the net, Huw achieved the rare distinction for a goalkeeper of finding the back of the net last season. In Llanfairpwll’s last game of the season against Waunfawr, he scored a last minute equaliser.

Our player manager Michael Johnston had this to say about our new signing:

“Huw is a very good goalkeeper who has a presence, is a great shot stopper, and good with his feet too. He has previously played with quite a few of our current players who all speak very highly of him. He has come along to watch 1876 at every chance he has and will be 100% committed to what we are trying to achieve.”

We would like to thank Conwy for processing this transfer so efficiently and wish them well for the season ahead.