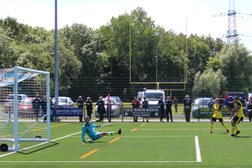 Exciting encounter between 1876 and Porthmadog

Bangor 1876’s first pre-season match was full of goals and excitement as the side returned to action with a home friendly against Porthmadog at Treborth.

Early on, Sion Edwards threatened twice for Bangor 1876. Inside the first ten minutes, he fired a shot just wide of the post from outside the penalty area before shooting into the side netting after jinking into the left side of the box.

However, it was the visitors who took the lead on the quarter hour mark. Rhys Alun Williams broke into the right side of the penalty area and fired a powerful shot across goal that went in via the far post.

Four minutes after going in front, the visitors doubled their advantage. Alex Boss received the ball in the middle of the pitch before striding forward and firing a powerful shot into the net from 25 yards.

At the other end, Jamie Petrie had a chance but his effort from the edge of the box was saved by Porthmadog goalkeeper Morgan Jones. Before the half hour mark, Porthmadog went three goals up when Dewi Hughes found the net with what looked like an attempted cross from the left side of the field.

1876 continued to press and received a reward for their efforts when Jamie Petrie found the net with a powerful shot from the right side of the penalty area to reduce the deficit.

Bangor 1876 made a strong start to the second period and got right back into contention when a trialist striker found the net from 27 yards two minutes into the half. Five minutes later the same player equalised after Jamie Petrie laid the ball off to him in the box following a cut back from Sion Edwards on the right. Indeed, the trialist could even have had a hat-trick after finding himself space in the box two fired in efforts twice more before the hour mark.

Despite 1876’s pressure, Porthmadog got themselves back in front midway through the second half when a diagonal ball into the box dropped at the feet of John Littlemore. The attacker scored with a powerful finish from eight yards out.

Within a minute of going behind, 1876 came close to leveling the score again but Joe Culshaw’s effort from 30 yards went narrowly over the crossbar. Shortly afterwards, Les Davies looked like he was about to find the net with a powerful downward header but Morgan Jones pulled off an acrobatic save to keep the visitors ahead.

However, it wasn't long before Bangor 1876 again found themselves on level terms. With twenty minutes left when Cian Williams scored with a glancing header after the ball was swung into the box from the right.

After getting back on terms for a second time, Bangor 1876 continued to press. Harry Galeotti twice had chances to score when breaking through the middle but lifted a shot narrowly over just after Cian Williams’ equaliser and had an effort well saved by Morgan Jones with just over ten minutes left.

Porthmadog also had some later chances of their own, but there were to be no further goals in a match played in front of a sizeable crowd at a sunny Treborth. We would like to take this opportunity to thank Porthmadog's players, coaches, and fans for making the trip to today's game and wish them well for the season ahead.

We have two more friendly matches coming up during the week ahead. First of all, we are at home to Holyhead Hotspur on Wednesday 6 July at 7.30pm Then we travel to face Cefn Druids in an away fixture on Saturday 9 July at 2.30pm.

Please remember that you can now buy or renew your club membership and purchase a season ticket for 2022-23. We have kept prices at the same level as last season and further information is available here: https://www.bangor1876.com/news/prynwch-eich-aelodaeth-a-thocynnau-tymorbuy-your-membership-and-season-ticket-2710258.html.