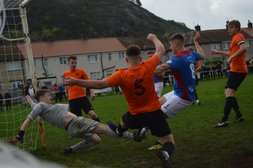 Bangor 1876 are safely through to the next round of the FAW Trophy after a 5-0 win away to Meliden.

The game got off to a lively start with Corrig McGonigle finding space in the box within the opening thirty seconds. He turned his man and fired in a shot but the ball went narrowly wide of the post.

Still inside the opening ten minutes, Bangor again came close to opening the scoring. Sion Edwards swung on a corner from the left which hit the post before being cleared.

However, just after the quarter hour mark a goal arrived. Jamie Petrie did well to beat his man on the right and dribbled towards the by-line. Petrie then cut the ball back to Corrig McGonigle who scored from close range.

Petrie had a lively first half and came close to adding a second goal on the half hour mark. However, his powerful shot from the right of the penalty area was tipped over by Morgan Parker.

Two minutes later, 1876 did managed to double their advantage and again it came from a ball played in from the right. Sion Edwards's corner kick found the head of Tom Clarke. Although his effort was cleared off the line, Corrig McGonigle turned in the rebound from close range.

As happened in the first half, Bangor 1876 had an early chance in the second period. Liam Morris broke into the left side of the penalty area and sent a powerful shot just wide of the far post.

Meliden had their first clear chance of the game ten minutes into the second half but James Cairns shot over from just outside the six yard box.

Bangor looked keen to add to their advantage and went close to scoring a third goal several times in the early stages of the second period. Liam Morris shot just over and a Gethin Thomas effort was deflected wide for a corner after a well-worked counter attack.

On the hour mark, Meliden had a chance but Matthew Griffiths's effort from just outside the box was saved by Ben Heald. Within a minute, however, Bangor extended their advantage. Kian Owen swung in a cross from the left and Corrig McGonigle scored his second off the afternoon with a downward header.

Halfway through the second period, Jamie Petrie came close to adding a fourth with a powerful shot from the right side of the penalty area. His effort went just wide of the near post.

Inside the final quarter hour of the game, a fourth goal for Bangor 1876 finally arrived. Liam Morris headed down a high ball into the path of Dylan Williams, who found the net with a composed finish from ten yards out.

During injury time, Corrig McGonigle came close to scoring his fourth goal of the afternoon with a bicycle kick following a long throw-in by substitute Shaun Lock.

However, McGonigle did add a further goal within a minute. Shaun Lock swung in a cross from the right and the ball was inadvertently nodded into his path by a Meliden defender. This enabled McGonigle to complete the scoring with his fourth and Bangor's fifth goal of the afternoon.

Many thanks to everyone who made the trip to Meliden to cheer on our team. We have another cup game next weekend (Saturday 5 November) in the Ardal North League Cip when we welcome Hawarden to Treborth for a game that kicks off at the earlier than usual time of 2pm.