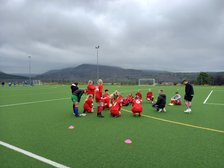 "We were really happy with the result, played some good football at times but obviously there were things to work on. Having discussed and anaysed the game during the week we identified a few things we needed to tweak moving forward. The team worked really hard on these in training and was really impressed with the attitude and intensity ahead of this weekends match. Last week we had players playing in unfailiar postions due to avaialbilty and Aron is looking to try something new with the squad, which I believe will give us a new dimension of play.

We played Llanystumdwy in pre-season but that counts for nothing. It was a competitive match and they have good players. So we fully expect the same again from them. They have a few new faces come in since then and are progressing week by week but then so are we so it should make for a great contest and we are looking forward to it.

For us its all about taking it game by game, concentrating on ourselves and looking to carry on that momentum from last week. We have an ideal opportunity to apply what we've done in training and build on the positivies from the last game. We'll need to work hard for it, earn it and they for sure won't make it easy for us but we have absolute trust and confidence that the team can go out and get that first home win of the season. "