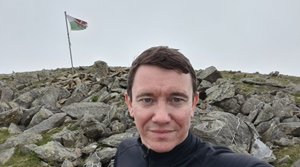 We recently chatted to Gareth Jones, a Bangor 1876 fan who lives on Anglesey. He gave us his views on the season so far, standout games for our team, and his favourite Welsh sporting Gareths.

What would you say are the best things about following Bangor 1876?
From day one there’s been a real feel-good factor at 1876. Everyone has been upbeat, welcoming, and it feels like there’s some real momentum growing at the club. The response from the city has been fantastic and it’s good to see the numbers that the club can pull, home and away. It makes for a good atmosphere and a really enjoyable matchday experience. I, like everyone, really look forward to every game, and I’m gutted I’m missing the trip to Blaenau, but am already counting down the days to the Aberffraw game.

What have you enjoyed about the season so far?
Mainly being at games again! It’s been a tough 16 months, so football being back and entering Treborth again has been great. The new additions to last season’s squad have raised the standard again, and despite the big wins against Pentraeth and Menai Bridge, the game against Pwllheli showed that we cannot rest on our laurels. But to just be back, see the friendly faces on the way in, and watch good football each week, it’s fantastic.

What's been your favourite moment following 1876?
Unfortunately I missed the FC United game due to work, so for me it is without doubt the win against Penycae in the Welsh Cup. A big crowd, a good away following, and knocking out a team two divisions above us, and this after knocking out another tier 3 team, Penrhyndeudraeth, in the previous round! It was a great day and there was a real buzz among the supporters leaving the ground, and the anticipation of what the draw for the next round would bring.

Wales has had quite a few sporting Gareths, notably in football and rugby. Who are your three favourite Welsh sporting Gareths and why?
Well the first one is easy, Gareth Bale! Wales’ greatest ever footballer? I think so. Some will say John Charles but he was before my time, so yes, Gareth Bale, and the way he’s ‘handled’ the last couple of years at Madrid has kept me entertained too!

Secondly, rugby legend Sir Gareth Edwards, it’s him I’m named after. Although I’ve never been that big on rugby, it’s always been football for me, but yes I would have to say him because that’s where I get my name from, and for what he has done for rugby in this country.

Finally, can I have Gareth McAuley for his own goal FOR Wales in 2016, in probably Wales’ toughest win in the Euros? No, got to be a Welshman? OK, I’ll have to go back to rugby then and say Welsh rugby star, and all-round nice guy, Gareth Thomas.