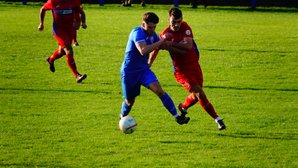 1876 secure an away victory

Our visit to Dyffryn Nantlle began with a blizzard of excitement as the first fifteen minutes saw a Les Davies header that hit the crossbar, a brace of potential 1876 penalties and a trio of corners.

The excitement continued in the 16th minute when Jamie Jones scored for the hosts with a wind assisted corner. In their first post-goal attack the away blues in red won another corner. 1876 continued to apply attacking pressure in the form of two Ben Owen throw ins but they were cleared by the home defence. Nantlle also enjoyed a good deal of possession as they kept the ball well.

The 27th minutes saw the next pivotal moment as a foul on Liam Morris resulted in a free kick near the home penalty area. Corrig McGonigle caressed a curling shot past Owain Roberts in the home goal to equalise.

The minutes after the equaliser had an air of cut and thrust as both sides attacked and the ball was moved around the pitch with abandon. From an 1876 perspective, one particular McGonigle burst gave hope but it only resulted in another corner.

From the 30th minute onwards 1876 began to exert a degree of control over the match’s course, a curled pass from Sion Edwards almost found the path of McGonigle then Ben Owen's shot flew narrowly over.

Edwards put 1876 ahead in the 35th minute when he unleashed a low level piledriver from 25 yards and the ball flew into the bottom right corner of the net. McGonigle increased the away lead with a penalty in the 37th minute, the penalty having been awarded for handball.

The partnership between McGonigle and Morris almost produced other goals before half time but their combinations of one touch passing, fluid movement and midfield pressing created opportunities that weren’t taken.

The second half began well for the hosts when Clive Williams connected with a long range free kick in the 50th minute and scored a headed goal. Any comfort that away fans may have been feeling evaporated as both sides swapped attacks for the next twenty minutes.

One of the 1876 attacks ended with the ball in the back of the net but Petrie had been adjudged to have been in an offside position at some point in the move’s progression. Petrie then hit a shot over. For their part ,in an increasingly even contest, the hosts almost ended a flowing move with a spectacular volleyed goal but the ball flew wide.

The blues in red restored their two goal lead in the 75th minute. Morris dribbled the ball into the area and unleashed a shot that was well saved by Roberts. The ball landed near Gethin Thomas and he was able to put the ball over the line from close range.

1876 almost increased their lead on several occasion but the home defence would not succumb. Petrie and Morris looked particularly sharp in the last sixth of the match but their work didn’t quite produce another goal , for example a Morris run down the wing and into the area placed the ball only inches away from the feet of a sliding Petrie.

However, in the end, the blues in red had done enough to earn a hard-fought away victory.

We’d like to thank Paul Redfern, one of our fans, for laying the pre-match Poppy wreath on behalf of the club.

We’d also like to thank everyone that came to support us in Dyffryn Nantlle. Our next match will see us return to cup action with a home FAW Amateur Trophy tie against Llay Welfare. The match will take place next Saturday (19 November) and will have a 2pm kick off.