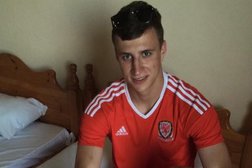 We are delighted to announce that Caio Hywel has joined Bangor 1876. We have been able to sign the talented local defender outside the normal transfer windows as he was a free agent after he took a break from football due to work commitments.

Caio will be familiar to many in the area as a player who came through the youth system at Bangor City alongside several other members of current squad, such as Gethin Thomas and Harry Galeotti.

The 26 year old defender has played in both of the top two tiers of Welsh football, and was most recently with Holyhead Hotspur. He has also played for Llanberis.

Our player manager Michael Johnson has talked highly of Caio and what he will bring to our team:

“I know Caio from when he was captain of the Bangor City youth team. He has experience at the level we’re playing at with other clubs and will be a perfect addition to our squad. He is a leader and an excellent defender who can play anywhere across the back four. He is another local lad who has jumped at the chance of playing for 1876.”