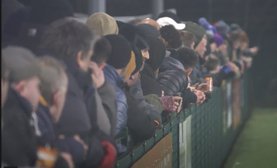 Our last game of the season will be the Intermediate Cup semi-final at Treborth on Saturday, 28 May KO 1530

The Club had written to the NWCFA noting that, if 1876 were to be involved in the Final against CPD Y Rhyl 1879, the Club was of the opinion that the choice of Nantlle Vale, on 31 May 2022, as the venue for a prestigious match, likely to attract hundreds of supporters, was unsuitable.

Its argument was based on a number of grounds, obviously reflecting the possibility that 1876 would be in the Final. These included the unsuitability of the ground infrastructure and surrounding road network to cater for a match involving two teams with a passionate fan-base, and enjoying a healthy rivalry; the likely size of the crowd and its safety; and the lack of adequate public transport to provide ease of access by the fans who couldn’t, or chose not to, travel by car. The need for an early kick-off on a ground without floodlights, given the need to travel, was also an issue, as highlighted by this week’s trip to Pwllheli.

The Coast FA had responded to the approaches by Rhyl and ourselves by undertaking a ground risk assessment, undertaken by Chris O’Neal. He visited Penygroes earlier this week and came to the conclusion that the ground was unsuitable, reflecting some of the points that we made, and others raised by the Nantlle Vale Committee, who agreed with him that the match should not be staged there. This morning’s meeting agreed with this conclusion, consequently the Final will not be played at Maes Dulyn, Penygroes.

Attention turned to alternative venues and it was reported that the grounds of Colwyn Bay, Conwy, Penmaenmawr, and Llangefni were unavailable for a variety of reasons. It was suggested that Llandudno was a candidate and that Nantporth might also be considered. Nantporth was immediately ruled out on technical grounds. Consultation with the police was also discussed, and it emerged that none had taken place so far but that would need to be done. It would be impossible to complete this in time so the decision was taken that the match be not played on 31 May 2022 as originally planned.

Discussion then turned to when the match would be played. The main talking point was the possibility of arranging it for the pre-season. It is understood that Tier 3 fixtures commence on 6 August and that there is the possibility of the clubs involved being in the first qualifying round of the Welsh Cup, due to be played on 30 July. This leaves 16 or 23 July as realistic dates for staging the match (we currently have a friendly away to Llandudno on 22 July which would have to be re-arranged were we in the Final). These dates will now be examined by the NWCFA as potential dates and venues will be sought with NWP consulted. We will obviously keep you informed.

Attention today (Thursday 26 May) turns to Cemaes where we play Bodedern in a dress rehearsal for the Intermediate Cup semi final which will be our last home match at Treborth. Please turn up in your hundreds to support the boys in their quest for the double. Kick off is 1930, please come early.