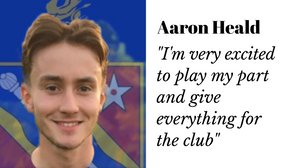 Aaron Heald tells Sean Williams about why he joined, how he kept busy over the summer and his hopes for the new season.

We spoke to new signing Aaron Heald on, amongst other things, why he chose to join 1876 and what he’s been up to for the past few months.
The recent recruit explains what encouraged him to join the club.

“It's a club with a vision and an ambition to climb up the leagues, and with a great blend of young and senior players it's a great squad to be a part of.”

The splash that the club made during the successful first season was also an influencing factor.

“At the start of last season, it was difficult not to know about them with the brilliant fanbase they had right from the very start. It's absolutely brilliant and I'm very excited to play my part and give everything for the club.”

The experience already within the club is something that the new man is looking to learn from.

“The players at the club were another big influence in me wanting to commit to sign; being able to play and learn from these players will only have a positive effect on my development”

During the forced time away from the pitch, Heald found a very good reason to keep busy.

“I ran 100 miles in the month of July as part of a fundraiser for Teenage Cancer Trust so that created a good base of aerobic fitness, and since then I've been working more on short and sharp training whilst still trying to go for a long run once a week.”

The first team squad recently returned to training and while doubts are growing as to how long this will continue, the new man has enjoyed the sessions he has been able to take part in so far.

“It's been different, but all the boys, coaches and everyone at the club have been professional and everyone has adhered to the guidelines in a strict manor.”

Despite the fact that competitive action does not seem on the near horizon, the new recruit as strong hopes for whenever we can get back to the action.

“My personal aims are to be a regular starter, and then to be a solid presence in defence along with contributing at the other end of the pitch with assists and a few goals.”

Heald is confident in what he believes to be his strongest position.

“Right back. I consider myself a defensive player and thoroughly enjoy defending. I also enjoy getting forward and joining the attack, so I feel that it's the best position to utilise my strengths.”

Despite his young age, Heald already has a significant amount of experience in senior football. This is experience that he believes has helped his development.

“I think playing in Tier 3 for Bodedern last season was great for me as I learnt how to grind wins out rather than outplaying opponents as that isn't the case in academy football. I believe having that experience will only put me in good stead going into this season playing on heavy pitches where it's not as easy to play attractive football.”

The new recruit also approves of the club’s ambition to develop young players.

“I was lucky enough to be given my chance at 16, and I feel now as if I've settled into senior football where others haven't been so fortunate and are still trying to adapt to senior football having not been given the chance prior. If we as a club can continue to breed good young players into the squad it will bode well for everyone.”

Heald’s message to supporters is clear.

“I am very excited to start representing Bangor 1876 as there are many good times ahead for this club. As a local lad, it's an honour to be a part of this journey, and I will give everything I can to ensure it's a journey filled with success.”