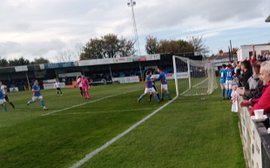 The match got off to a lively start as the hosts forced a chance within the opening minute, but the ball was deflected narrowly wide.

After eight minutes, it was Bangor's turn to threaten. After the Rhyl goalkeeper Ryan Roberts failed to claim a free-kick, Corey Jones headed the ball goalwards but his effort hit the top of the bar and went over. A minute later, Jamie Petrie fired in a shot from the right that was saved by Roberts.

On the quarter hour mark, Rhyl had a chance from a corner but Jonathon Taylor's header was saved by Huw Shaw. However, it was not long before they had another chance from a set-piece.

The ball seemed to have been cleared following an attack but the referee awarded a penalty for a foul on the edge of the box. Although Alex Jones's initial shot was saved by Huw Shaw, the Rhyl midfielder side-footed in the rebound.

At the other end, Les Davies came close to scoring a rapid equaliser but his header landed on the top of the net following a corner.

Midway through the opening period, Bangor 1876 leveled. An excellent through ball from Sion Edwards reached Liam Morris, whose first touch took him round Roberts. He then kept the ball in at the by-line and dribbled across the face of goal before finding the net with a powerful low finish.

As Bangor 1876 were gaining momentum, they suffered a major blow. After confidently claiming a cross ball, Huw Shaw landed awkwardly and was stretchered off. Kian Owen took over in goal and Shaun Lock came off the bench to take over at left back.

Inside the last five minutes of the second half, Les Davies came close to giving Bangor the lead when the ball dropped to him following a corner but his shot was blocked.

During first half injury time, there were chances at both ends. First of all, Kian Owen saved well with his feet after Macauley Taylor was clean through on goal. A neat move on the counter attack saw the ball worked towards Gethin Thomas on the right of the box. His side-footed shot was on target but repelled by the feet of Rhyl keeper Roberts.

After the break, the game initially went into something of a lull as the sides canceled each other out and chances were at a premium. The first chance of note went to the hosts but Kian Owen did well in goal to palm a header from Jonathon Taylor onto the post.

At the other end, Gethin Thomas was set to to clean through on goal but the referee surprisingly stopped play for an earlier foul by Rhyl rather than play advantage. Minutes later, Corrig McGonigle came close to scoring his second when he got on the end of a cross from Sion Edwards but his downward header went just wide.

Sion Edwards was again at the heart of the action as the game entered its final twenty minutes, curling a free-kick just wide from 25 yards. Shortly afterwards there was a short delay after the referee showed a red card to Rhyl manager Gareth Thomas after the intervention of the stand-side assistant referee.

With twelve minutes left, substitute Liam Morris floated the ball into the box and Corrig sent a looping header over Roberts and into the net. Not long afterwards, Les Davies came close to extending the lead with a header that went just over.

With six minutes left, Rhyl were reduced to ten men when Miles Jones was shown a red card for kicking Liam Morris after miscuing a clearance. Rhyl instantly had a chance at the other end but Kian Owen came out bravely to save at the feet of Alex Jones.

Deep into injury time a melee insure after the award of a corner to Rhyl. The outcome was a red card to Tom Clarke and Alex Jones. Jones then threw several punches while leaving the pitch and it took several minutes for order to be restored. Further red cards were then shown to Jack Higgins and Aaron White of Rhyl and Corey Jones of Bangor. When the dust settled, the referee blew the full-time whistle as Bangor clinched an impressive away victory.