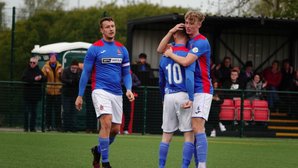 Bangor 1876 welcomed Brickfield Rangers to Treborth for the first time in a league match played on an afternoon of sunshine and showers.

The sight of a team called Rangers playing in green and white hoops and against a team wearing blue and white will certainly have been a curious sight for fans of Scottish football.

The first chance fell to 1876 inside the opening three minutes following a corner on the left. Les Davies headed the ball towards the back post where Corey Jones nodded the ball goalwards, but his effort was saved by Adam Jones.

B4 shot wide from 20 yards after striding forward. That seemed to provide a wake-up call for 1876, who went straight up the other end and took the lead when Corrig McGonigle was found in space breaking into the box. After controlling the ball, he beat visiting goalkeeper Jones with a calm left-footed finish.

Bangor continued to press inside the opening ten minutes. McGonigle came close to adding a second when he found space on the left of the box and a powerful shot from the edge of the box from Liam Morris was well saved by Jones.

Bangor didn't have it all their own way in the early stages and the visitors had a great chance to equalize when a neat passing move resulted in Andrew Dale finding himself in space just inside the penalty area. However, his side-footed effort was well saved by the feet of home goalkeeper Huw Shaw.

Just before the quarter hour mark, Brickfield threatened again but Isaac Dawson's long range effort was tipped over by Shaw.

Bangor, however, doubled their advantage in 19 minutes. Les Davies was fouled in a central position 25 yards out by Ben Pritchard. Corrig McGonigle stepped up to curl an effort into the top right hand corner despite Jones managing to get a hand on the ball.

As the first half approached its midway point, the visitors twice had chances to reduce the deficit. First of all, Andrew Dale got to a long ball over the top before Huw Shaw. Despite rounding the home keeper, he was unable to cut the ball back to a team mate and the ball was cleared.

Moments later, Isaac Dawson headed over after a cross from the left reached him at the back post. At the other end, 1876 immediately threatened again after McGonigle broke into the box but he was unable to cut the ball back to a colleague.

Brickfield continued to threaten and Huw Shaw had to again save with his feet after Gerson Silva Neto fired in a shot from the left side of the area after a quick break.

Just before the half hour mark, Corrig McGonigle came close to completing a first half hat-trick. A misplaced pass by the visitors allowed him to break into the left side of the penalty area but his rising shot cleared the cross bar.

With the rain coming down as half-time approached, McGonigle managed to completed another hat-trick. After neat interplay with Liam Morris on the left, the prolific attacker found the bottom corner with a calm finish.

In the opening minutes of the second half, Bangor almost extended their advantage when Jamie Petrie cut inside on his right foot. However, his deflected shot went just over the bar.

Petrie wasn't to be denied though, and found the net from 20 yards in the 52nd minute not long after Corrig McGonigle had hit the post following a pin-point cross from Kian Owen.

A minute after scoring the fourth, 1876 added a fifth. Petrie showed pace and determination on the left to keep the ball in play. His ball across goal was met powerfully at the back post by Harry Galeotti, who scored for the third consecutive game.

Bangor continued to press for further goals and it wasn't long before McGonigle fired in a shot from close range. 1876 appealed for a penalty after the goalbound effort appeared to strike the hand of a visiting defender but the referee waved away the appeals.

In the 71st minute Bangor added a sixth goal when Les Davies flicked a long throw from substitute Shaun Lock into the path of Liam Morris. Morris found the net with a calm finish.

Just inside the final fifteen minutes, Bangor looked to have become the second team this week to score seven against a team called Rangers. However Gethin Thomas's effort was ruled out for an offside against Liam Morris despite the ball appearing to have been headed into his path by a visiting defender.

Soon afterwards, Harry Galeotti fired over after being played in by a neat pass from Jamie Petrie. In the minutes that followed, a looping header from Les Davies went just over and Liam Morris had a shot saved by Jones.

Inside the final minutes, Bangor continued to press for further goals. Shortly before the ninety minute mark, there was a lengthy injury stoppage after a clash of heads between Brickfield's 15 and Bangor's Les Davies resulted in both players requiring treatment. There were no further goals as 1876 secured a six goal win.

Our next game is against fellow North Wales coast fan-owned side Rhyl 1879. The match kicks off at 2.30pm. If you can, please make the trip along the coast to cheer on the team in this eagerly anticipated encounter.