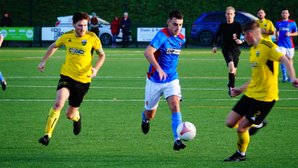 The blues reach the last 16

1876 began the last 32 match in a determined fashion. The early minutes of the match reflected this idea as both Corrig McGonigle and Liam Morris, with a header and a shot respectively, both narrowly missed the goal.

That’s not to say that the 15 minutes were a one-sided affair as both sides attack. Firstly, Hawarden applied enough attacking pressure to yield a few chances, one of which required the skills of Ben Heald to stop it becoming a goal.

Secondly, 1876 continued to create chances but couldn't apply that assured touch at the end, for example McGonigle missed after using his knee to connect with the ball and Harry Galeotti’s powerful shot rose too far to trouble Callton, the away keeper.

The middle portion of the half saw 1876 use more thoughtful midfield probing to look for attacking openings. However, the nearest they came to a goal was Liam Morris’ delicate chip that narrowly missed.

The 35th minute almost saw a goal when the Hawarden defence almost sliced a clearance the wrong way but Callton prevented the inadvertent intervention from crossing the line with an adroit save.

The rest of the half was fairly even as both sides continued to attack with intent, in the last minutes of the half an 1876 backpass caused am indirect free kick but the eventual shot missed the target.

Both sides swapped chances In the first 5 minutes of the second half, both Hawarrden's strikers and Galeotti missed chances.

The blues finally took the lead when Tom Clarke found himself at the end of a passing move in the 55th minute. He calmly caressed the ball over the advancing Callton to find the net. Whilst the home side were enjoying the ascendancy, they forced a brace of corners in quick succession.

To those of a blue persuasion it may have looked as though their side was starting to ramp up pressure, especially as the 1876 midfield began to battle hard with an apparent higher level of urgency. However, the match was more finely balanced and both sides applied attacking pressure by attacked or counter-attacked to reply in kind.

Consequently when Hawarden equalised in the 68th minute through Gunson nobody could have claimed that they didn't deserve it. Shortly after the goal Liam Morris and Sion Edwards tried to force the match back towards 1876 with energetic bursts from midfield but the scores remained level.

1876 regained the lead when the returning Joe Culshaw curled the ball into the area in the 78th minute, the ball was propelled with such affect it evaded the touch of every other player within the area. After the goal both sides continued to attack, one particular Hawarden attack was only ended flying frame of Heald.

The 87th minute saw a third 1876 goal when Ben Owen applied a close-range finish, the opportunity that arose thanks to the keeper saving .McGonigle's header. Tom Clarke completed the scoring in injury time when his shot somehow evaded the keeper's grasp.

We’d like to thank everyone that attended the match, especially considering the first half weather. Our next match will see us return to league action with a visit to Nantlle Vale. The match will take place next Saturday (12 November) and will have a 2pm kick off.