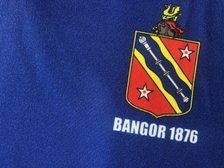 IIn April 2019, the then Bangor City FC Supporters’ Association held a meeting at which it decided to become incorporated as a Supporters’ Trust, following the example of a number of other supporters’ groups, including those running Chester FC and Wrexham AFC.

With a view to actively engaging with, and involving, the whole community, and working with partners who share its vision for a cohesive, sustainable and inclusive future for competitive football in Bangor, the Association applied to the Financial Conduct Authority to become a Supporters’ Community Mutual widely known by the description Supporters’ Trust or, in our case, a Society.

On 31 May 2019, it was informed that its application had been approved and the new Society started trading immediately. With a view to ensuring the continuity of competitive football of the highest possible standard in the city, and its catchment area, the Society began the process of establishing a new football club.

Society members were invited to propose their names for the new football club and Bangor 1876 was the overwhelming choice of the membership. An application for membership was lodged with the Football Association of Wales and in mid-June Clwb Pêl-Droed Bangor 1876 Football Club was placed into the Gwynedd Football League (Tier 5).

The name Bangor 1876 is an acknowledgement and homage to the origins of organised football in Bangor, which can be traced back to a public meeting held in the Magistrates Room on 18 December 1876. Then, as now, the aim was to ensure the continuity of competitive football of the highest possible standard in the city and its catchment area.

Back in 1876, blue and red were adopted as the official club colours with subscriptions fixed at five shillings. Suitable accommodation was found when a field adjoining the old Friars School, subsequently known as Maes-y-Dref, was hired from a gentleman by the name of Thomas Williams.

Bangor 1876 also decided that the City of Bangor coat of arms be adopted as the official club crest. The choice of crest reflects the club’s commitment to serve the local community, and preserve its proud footballing heritage, whilst engaging with supporters from Bangor, the surrounding area, and further afield. The adoption of a blue and red colour scheme for the playing kit, with the home strip consisting of royal blue shirts with red trim, white shorts, and blue socks with red tops has historical connotations. The change strip is all red with blue trim.

Thanks to the partnership forged with Bangor University, The team currently plays its home matches on a 3G surface in the picturesque setting of the University’s Treborth Playing Fields, straddled between Thomas Telford’s Menai Suspension Bridge and Robert Stephenson’s Britannia Bridge, on the banks of the Menai Strait.

During its first season the Club boasted a 100% record, winning the last-ever Gwynedd League championship. Despite the season being curtailed by the COVID-19 pandemic, the team scored 115 goals conceding only nine. In the 2021-22 season, the Club played in the Premier Division of the North Wales Coast League (West). The Club once more set a number of goal scoring records scoring 139 and conceding 19. At the end of the season, the Football Association of Wales' National League Board chose the Club to fill a vacancy at tier 3 level in the Welsh Football Pyramid, consequently the Club will play in the Ardal League North West in season 2022-23.